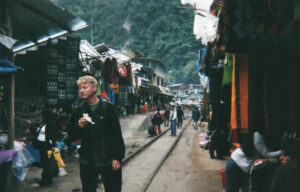 Now to fully understand this revelation, it’s important to give you a little background. At the moment of this stunning discovery I was 31 and living with my parents. I’m not proud to say that. In fact I’m embarrassed (no offense to all you other thirty somethings living at home). In my defense though, my homestay was the result of an attempt to pursue a noble cause. The previous summer I’d sold most of my possessions and ran off to Europe in search of… what else, true love. Well obviously things didn’t work out the way I’d anticipated, so there I was living in my parent’s basement in a suburb of Minneapolis, but for sure it was temporary. But don’t get me wrong, it wasn’t all bad. In fact mostly it was great. Mornings reading the paper, afternoons doing lawn work, a huge kitchen to cook big dinners and best of all I had my own bathroom. This gave me a place to ponder life, the future, and ironically the nature of time. There were the unfortunate side effects of having lots of family around as well as having my pride constantly remind me of where I was, but overall, I was coping.

So that fateful day I stepped into my private sanctuary (the shower), reached for the bar of soap, and WHAM!, it hit me. No not the soap, the revelation. The bar of soap was almost gone. All that was left was that annoying sliver that always slips through your fingers or sticks to your leg. In the time that I’d been staying with my parents, I had already used an entire bar of soap. I was sure of it. When I returned to the States I’d made a run to Target and picked up all the essentials: toothpaste, deodorant, shampoo, hair-gel, and a three-pack of soap. I first used that bar of soap my second day back. No one else used that shower or that soap but me. I alone had used up almost the entire bar. In that moment of surprise it dawned on me; I’ve been living at my parents at the age of 31 for an entire bar of soap. And this wasn’t a tiny bar of Ivory. This was a full on bath size Safeguard bar of soap. The concept of time had just been obliterated.

To help put this in perspective further, you should know that I’d spent the past few years alternately living out of a backpack or planning to live out of one. And let me assure you, when I’m living out of a backpack, I’m seldom worried about what day, week, or even month it is. Out on the road conventional time tends to blur together and turn into a series of experiences rather than schedules. For instance, if I’m hungry when I get off a train at midnight in Barcelona, I eat. If I’m tired in Prague when I get home at eleven in the morning, I go to sleep. If a glass of Chianti is looking me in the face at ten am on the Italian Riviera, I decide to order lunch along with it. Although sometimes oblivious to conventional time, I always notice that my bathroom supplies seem to disappear at a consistent rate. Apparently good hygiene equals good time keeping.

The morning of my chronological epiphany, I emerged from the shower with a new outlook on life. Aside from the reminder of my current pathetic situation, I had found a reasonable and functional way to keep track of time. This must have been exactly how Einstein felt at that precise moment when it all came together and the Theory of Relativity was born. And now that I think of it, Soap Time isn’t too far removed from Einstein’s little treatise. As I looked around the bathroom I noticed all sorts of consumable hygiene products that marked my current dismal circumstances. I’d been there for just about a third of a tube of toothpaste, a quarter of a bottle of shampoo, two-fifths of a thing of deodorant and a half a bottle of hair gel. The signs were everywhere and suddenly I knew exactly how long I’d been home. But as I thought further I realized I was halfway to another haircut, I’d been there a nail trimming. I’d have to stop and think about how many underwear washings I’d been through, but surely it would fit right into the pattern. I had to tell someone. What if I had a heart attack right now and I never passed on this oracle. I had to let someone know.

Later that day I was cruising around with a friend. There was a moment of silence. My head was spinning. I had to share my new observations. I took a deep breath, gathered my thoughts, and let it fly. I told him about it all. I unleashed the entire new groundbreaking earth shattering Theory of Soap Time Relativity and braced for the aftershocks. It’s at this point that I should remind the reader of one very important fact. Not only have I been living a bit of an unorthodox life by traveling throughout the world for some time, but I’ve always seen the world a little differently. Some would say this causes my perspective to be a little skewed and me to be a little strange. They would be correct. I generally agree that my view of the world is a little different from my family and friends, but have never really grasped the degree. At a time when most of my friends are already married and starting families, I’ve recently sold most of my possessions, stopped working, and kept traveling. For these reasons and many others, people that know me tend not to pay much attention to what I say. And so that’s what happened upon the very first public release of my new theory. Nothing. Nada. Zip. Not even a “Humph.” My friend started talking about how much longer until his lease was up and he could get a new car, how much vacation he had for his next trip to the North Shore of Lake Superior, when was he going to be able to retire. Not a single hygiene product mentioned. I had changed and I couldn’t go back. To me it was all just a bunch of senseless gibberish. After all, he wasn’t talking Soap Time.

* Note: This was written sometime around 2003 or 2004, but the concept still holds true for me to this day. In fact I happen to stranded in French Polynesia and I’m taking some time to update my blog. I’ve been here now for almost 2 bars of soap, 3/4 a tube of toothpaste and a bottle of hair gel. I haven’t had a haircut in almost 4 months so that last metric (hair gel) might be a bit skewed.