There comes a time in everyone’s life where I feel they need to reconnect to the ocean and the beach. It must go way back to when our ancient ancestors crawled out of the primordial ooze to first walk on dry land. The rhythm of the waves lapping against the shore is like the beat of mama’s heart. It’s like going home. So this week, we’ve gone “home” to the Caribbean off the coast of Cancun Mexico, to Isla Mujeres. White sand beaches, turquoise waters, palm trees, ceviche, and cervesas. DAMN it feels good to be home.

Now if you know me, you know I’m not much of a “lay on the beach for days” type guy. I get board, I get antsy, but most of all I get burned. I’m talking glowing red radiate heat a few feet away sunburned. I swear I can sit in the shade all day after being dipped in a vat of 30 SPF sunblock and I’ll still get burned. It’s happened before. Of course if I’m really careful and slowly introduce my sun-deprived, winter seasoned, pasty Scandinavian heritage skin to the Mexican sun, I can develop a base and actually get tan. But on a one-week vacation, that’s not really an option. Usually I just put on a sombrero, my blue linen chambray shirt, as many layers of sunblock as I can stand and wander the beaches taking pictures of seashells, schedule tours of some Mayan ruins, or go diving and snorkel for hours like Jacques Cousteau. This trip I decided I’d be different.

I told Amy, “I’m not going to plan anything. We can sit on the beach every day. I’m ok with doing nothing.”

She looked at me knowingly and mocked, “There is no way you can just sit on a beach all day.”

“I’ve changed,” I promised. “You’ll see. I’m not doing a damn thing but lounge on the beach.” And that’s what we did.

We rented a cabana and let the stresses of normal life fade away. I looked at the ocean. Read some. Drank a beer. Looked at the ocean some more. Looked at butt cheeks separated by thong bikini bottoms while pretending to look at the ocean. Ate some ceviche. Took a swim. Looked at the ocean or butt cheeks. And so on and so on. It’s amazing how fast a day goes by when there’s nothing to do. I loved it! It reminded me of the time when I first started TLOM years ago. I had nothing to do. Owned no house or car. Had no job. Had money in the bank. Had no where to be. I could sit on a park bench in a foreign country for hours just watching people. And I frequently did. It was freedom. But after while that got old. Without a purpose, I felt lost. So for a purpose, if nothing else, I was ready to slip back into society once again. And here I am ten years later in a committed relationship with a house and a truck and dog and a business and a little bit of stress. So flashing back to a time when I had nothing, but everything I wanted at the time, has been lovely.

But, even though I was on the beach for hours relaxing, that didn’t mean my mind wasn’t working. In fact, it was sprinting at break neck pace as usual, just focused on different things. For instance, early on our third day on the beach, there was a guy untangling some nylon webbing. “What’s this dreadlocked hippie white boy doing,” I thought (I’m super judgemental in my head)? “Setting up for parasailing,” I wondered? No, we could see them parasailing across the way along the beaches of Cancun but I hadn’t seen any parasailing here on Isla Mujeres. Now he was digging a hole in the sand. He’s got some posts of some sort. For at least an hour I ran every scenario I could think of but never reached the true conclusion. Long story short, he was putting up a sand volleyball net which hadn’t been there the previous days. The webbing was the out of bounds line. But for me, this was something completely new that was out the normal and I had to figure it out. It was a productive day.

On day four, the volleyball net was still up. It now fit into my small beach world so I could almost ignore it. It was there yesterday so it belonged. Time to move on. But wait, it said something IN the net! Across the full length of the net there was a word in block letters. Eight letters. “What does it say?” The words were written on the other side so the letters were backwards. I could have gotten up and walked a couple hundred feet down the beach to see what it said on the other side, but what fun would that be? This was a puzzle. I could figure it out. I had time.

I wouldn’t say I was obsessed with the wording on the net, but sometimes It’s hard for me to let go. And it’s really hard for me to quit. In the 5th grade, more than anything I wanted to quit the bass violin because I wanted to play jazz pizzicato (plucking the strings) and the teacher made me play classical (with the bow). But my parents made me finish out the year despite my tantrums. I could be a world class jazz bassist, but it wasn’t meant to be. C”Est la nvieI’ve ever forgotten that lesson. I seriously am unable to quit most anything. Thanks Mom and Dad. I would not leave the beach without figuring out this challenge.

“We’re in Mexico so it was clearly Spanish.” My Spanish vocabulary is limited, but from the other couple languages I know, I can usually see some Latin roots. “It might be two words. Think! The last three letters are AHT.  That’s not a word.” Hmm, I thought. “Is it an E?  Think backwards. THA ILD UB? Could it be Thai? Maybe it’s a yoga volleyball net? Indian?” It wasn’t coming to me. And when something isn’t coming to me, I’ve learned to step away. There’s nothing like a moments distraction to sharpen one’s focus. So I looked at the ocean for a bit (butt cheeks) and went for a quick swim to cool off and re-sharpen my wits. And it worked! On the way back to our cabana, I realized the A was not an A at all but a G. (Long Pause). A “G.”  A “G?” I’m a fucking idiot.

“THGILDUB. Backwards though. Forward it’s BUDLIGHT.” Hey look, there are some butt cheeks. 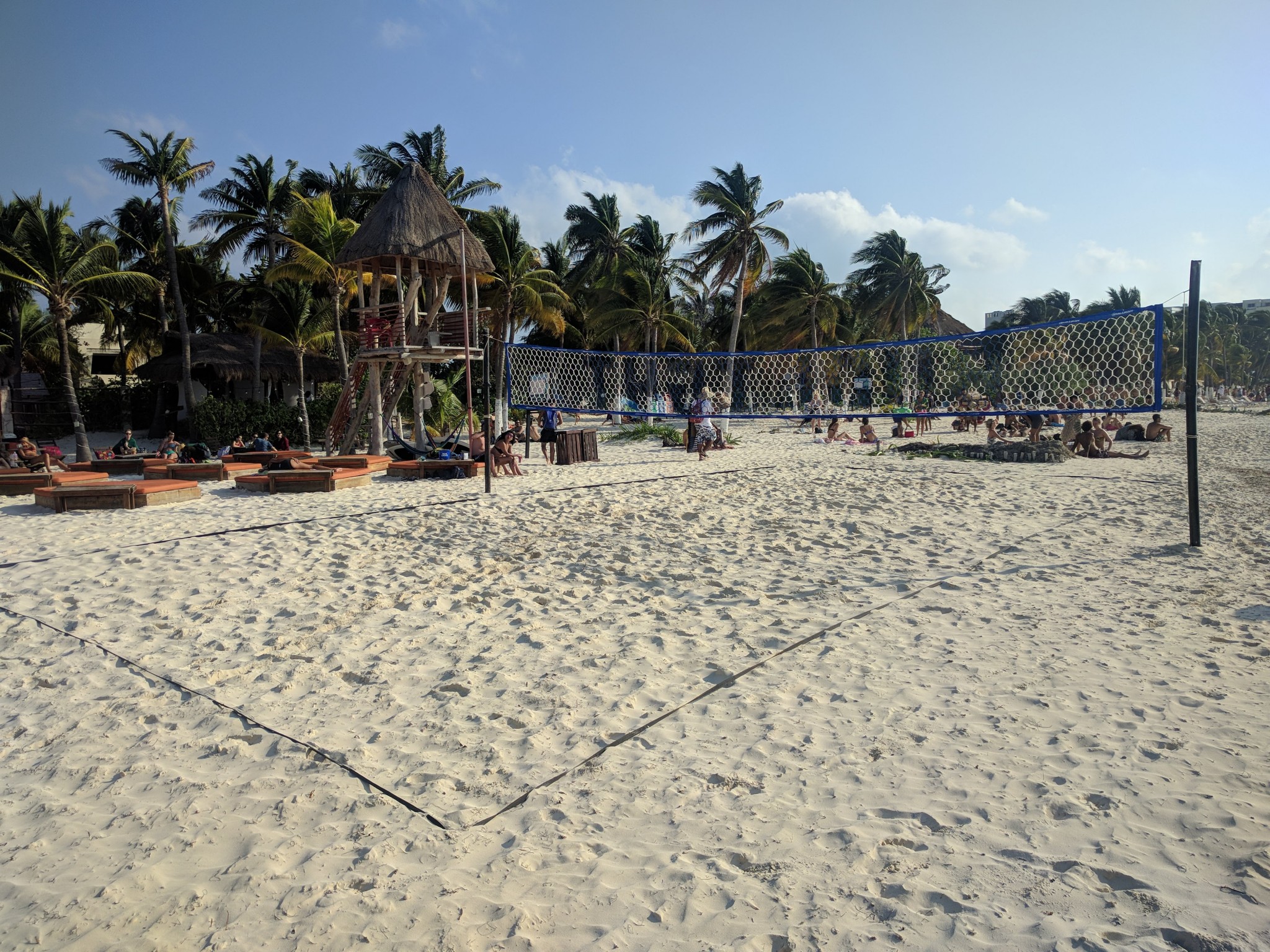