I was hell-bent on getting at least one motorcycle camping trip in this August before my Fall Midwest Motorcycle Tour. And as it turned out, this a great first trip.

I loaded up my camping gear, strapped on my tank of water and camp chair and hit the road on a Thursday at about 1:00 in the afternoon. Colorado was right in the midst of the monsoon season so afternoon storms are much more likely than not, and that chance is generally amplified when you’re heading into the mountains. But I had rain gear and a pocket full of past excuses so I was not to be denied. 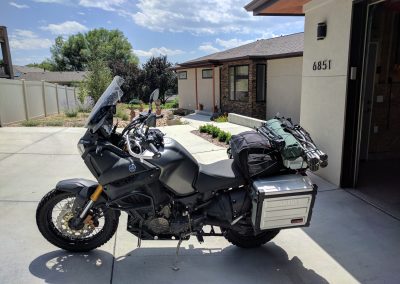 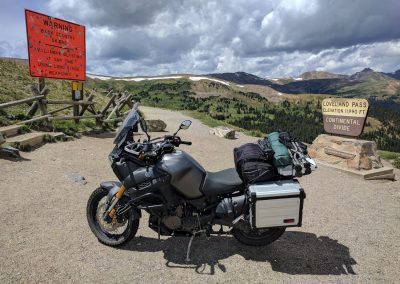 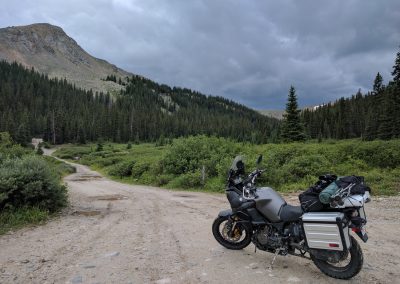 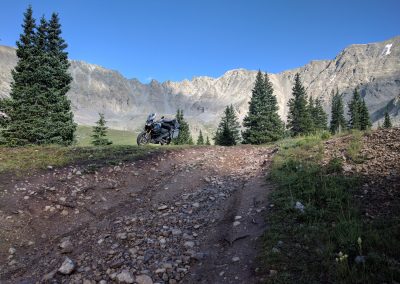 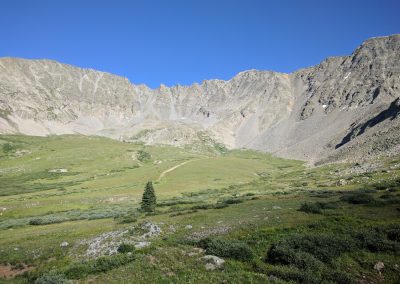 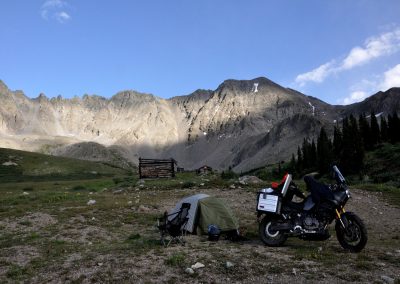 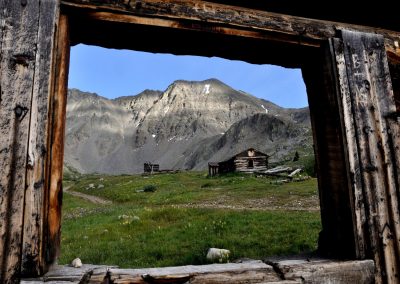 Classic image through the window of the cabin 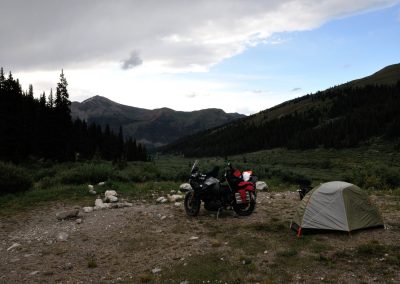 Looking north out of the canyon 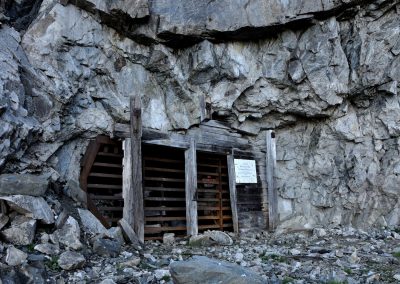 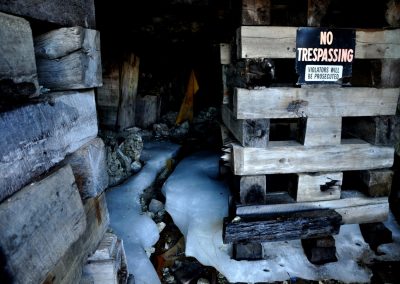 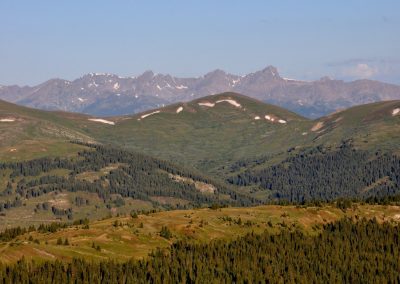 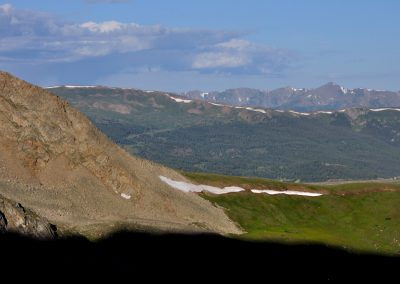 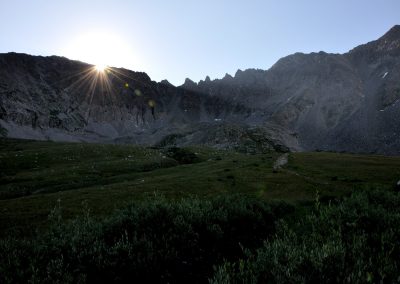 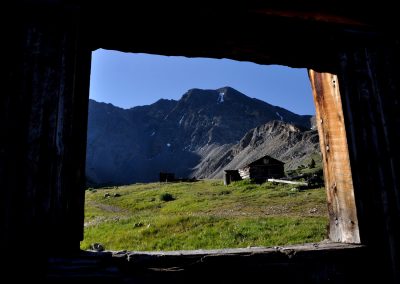 The cabin window at sunrise.

Generally on the motorcycle I’ll avoid interstate highways, but since I was getting a late start, and the Interstate was almost a direct shot, I decided I-70 was the best way to go. And with my 1200cc Tenere and some ear plugs, I was good to go. I burned up the front range and over the continental divide at Loveland Pass (11,990 feet/3.654m). In fact I made such good time I decided to check out the town of Montezuma just behind the Keystone Ski Resort. The clouds were pretty threatening when I got there so I figured I better head down to Frisco which was my last bit of civilization before heading into the backcountry.

When I got to Frisco the sky to the west, was black as my excrement after a long night of drinking red wine. So I decided it might be a good idea to check one of the local breweries and wait for the weather to pass. Right on the corner into town is Backcountry Brewery which I’d seen many times before but never visited. I stopped in and tried their Pilsner which was adequate, but not mind-blowing. An all too common result when tasting beer at the hundreds of new breweries popping up. I finished my beer and headed out. Somehow in that 30 minutes the sky had miraculously cleared so I jumped back on my cycle and headed west.

I exited I-70 at Copper Mountain ski resort and headed up Highway 91 towards Leadville, the highest US city at 10,200 feet. I didn’t quite make it to Leadville because my destination, Mayflower Gulch was just a few miles up the road. I turned off at the parking area and headed up the trail, freshly soaked with the recent rain. The trail up is a popular hiking trail because it’s less than 3 miles one way, and ends at a spectacular cirque. Fortunately for me licensed vehicles are allowed and I easily rolled up to the old mining town of Boston.

The trail seemed to continue up past the mining town, so I briefly tried to get up a bit higher. But with the recent rain, being alone, and a somewhat challenging ascent, I decided to turn around. While executing a textbook three-point turn on the rocky trail, I got high-centered with a big rock on my skid-plate. I struggled to get free but couldn’t and had no choice but to lay my bike down. I threw the offending rock off the trail, struggled to stand up my over-laden hog, and rode down to the gate that lead to the old cabins. There was a clear path around the gate and with no signs to say the contrary, I assumed the gate was to keep out annoying Jeeps and trucks, but to allow in cycles. Knowing that was not the case, I pulled around the gate anyway (but just by about 10-feet) and set up camp at 11,500 feet (3.500 m) above sea-level.

There was no one else around, and with the recent rain, I wasn’t expecting anyone else. So I fired up my camp stove and made a cup of hot chocolate with a little special high-altitude Jamison elixir. I threw on my down coat and relaxed in my camp chair. The clouds were were building again so I didn’t think I’d be getting any sunset photos tonight. I strolled up the gulch a few hundred yards to the old Boston mine camp cabins and took a couple photos. I headed back to my camp to make dinner only to realize I had forgotten to pack my silverware. Clearly I was out of camping practice, but I did have my trusty camp knife. So I looked around for a stick that could be made into a spoon, whittled it to a rough shape and found a rock to grind and smooth it into a functional utensil.

After my tasty dinner of re-hydrated beef and noodles, I was enjoying an after dinner drink when some guy appeared out of nowhere. Well, I had consumed a couple Jameson hot chocolates at this point, at altitude, so maybe not out of nowhere. But it did surprise me.  I said hi and he reciprocated, set down his backpack and ran up towards the cabins with a camera. I didn’t think much about it until an older lady appeared. She said her son, a graduate of the prestigious San Francisco Art Institute, had encouraged the entire family to join them on this mostly flat hike. I laughed because my motorcycle had to work pretty hard to get up the trail s o it definitely was not flat. After a few minutes, the rest of the family slowly appeared from the trail. Last to arrive was a small boy wearing a Chicago Cubs hat. All of a sudden it clicked. I recognized the boy with the hat. This family had just been at the Backcountry Brewery. Small world.

“Were you all just at the Backcountry Brewery in Frisco a couple hours ago?” I asked. ” I was sitting across from you with the motorcycle helmet.” Sure enough, that was them.

“I don’t think there’s going to be much of a sunset tonight,” I said pointing to the dark western sky. And then, as if those Iowan Christians had called in a favor, the sun lit up the mountain like a fucking fire! Please excuse my profanity, but it was absolutely amazing, and if ever there is a moment that demanded profanity, that was it! I’ve never seen anything like it. The entire mountain to the south was burning orange! We all spent the next 5 minutes snapping photos. When it was over I felt like Austin Powers after a photo shoot. I wanted to just throw my camera and say, “I’m spent!” 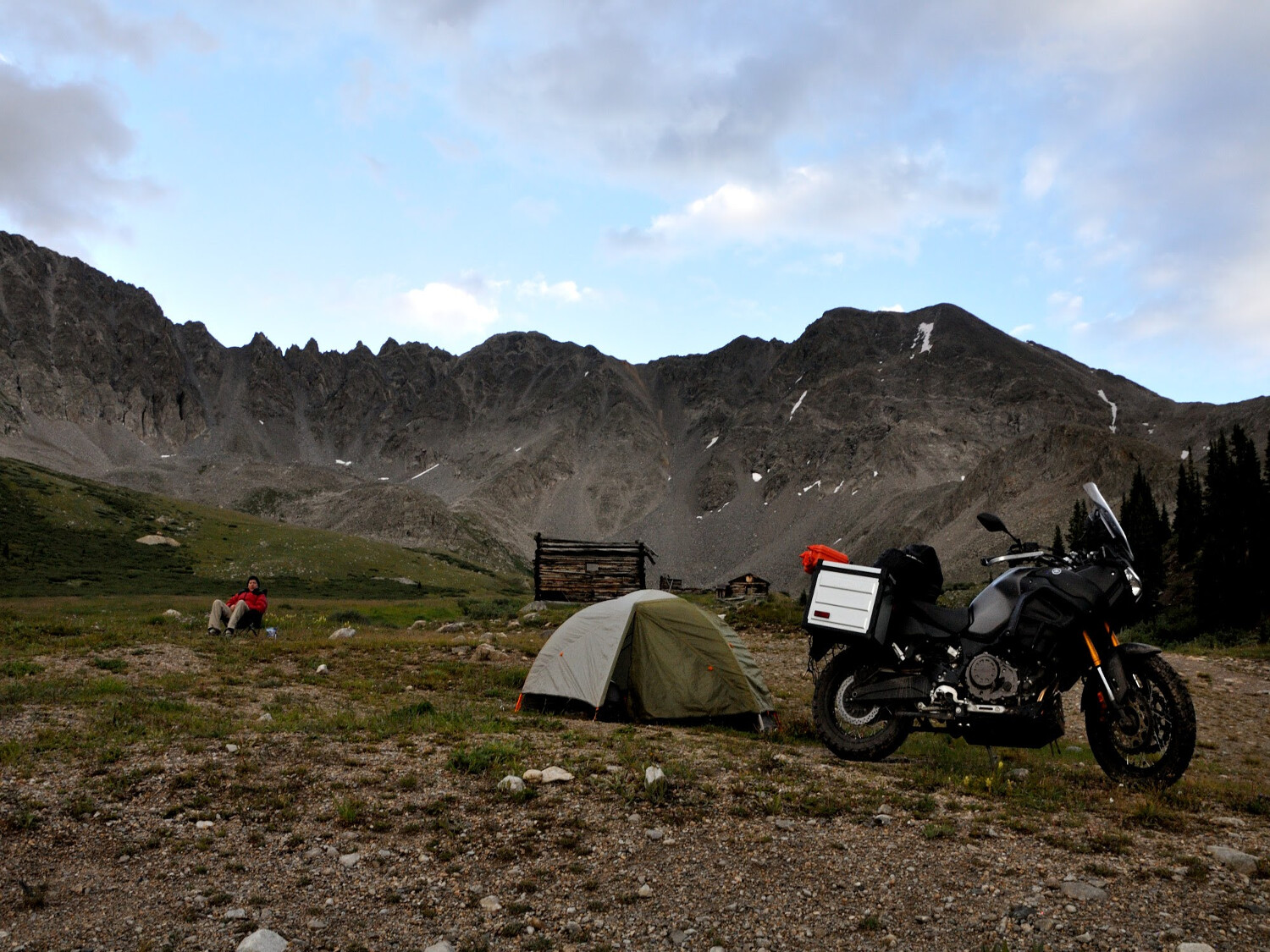 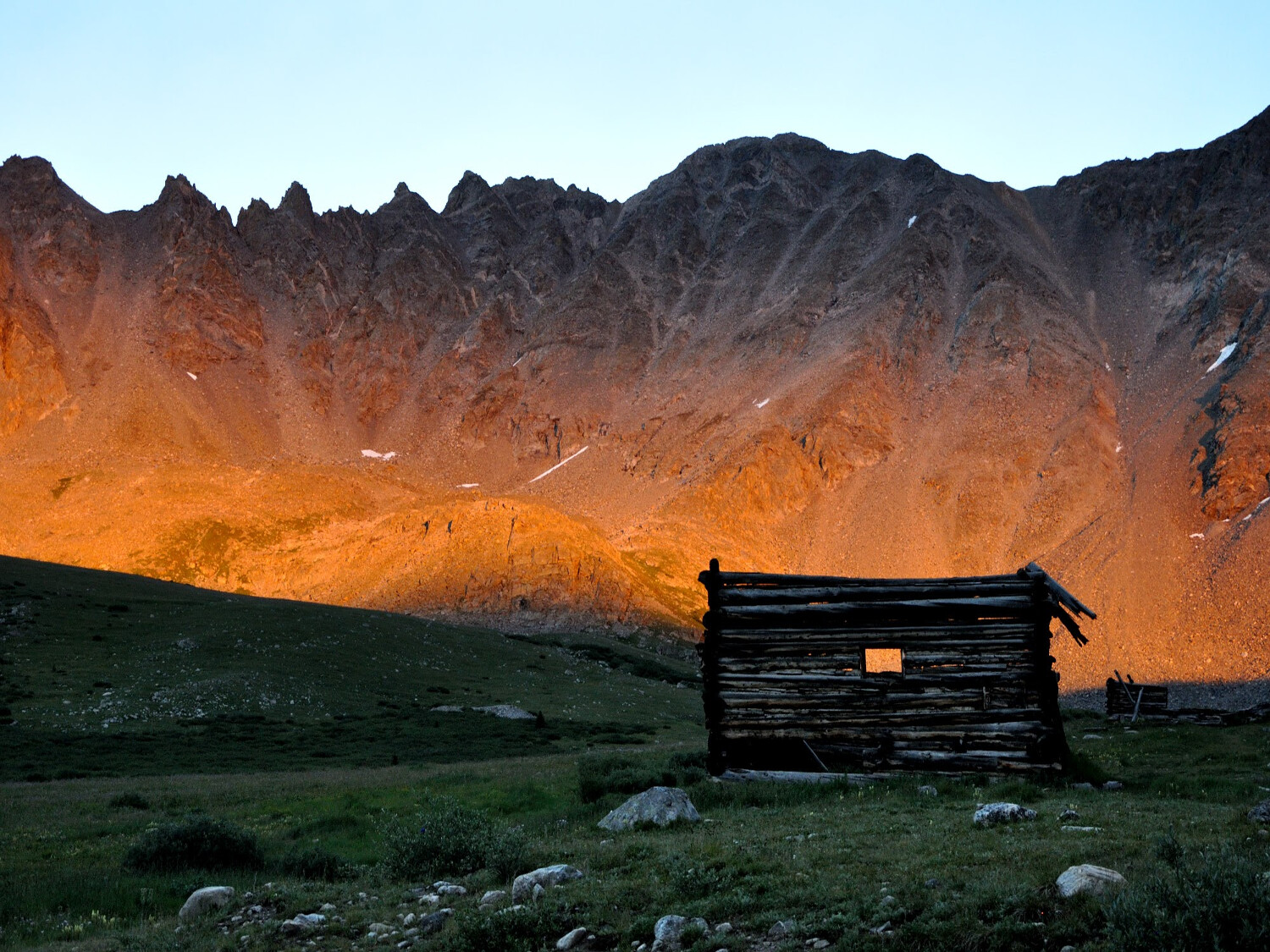 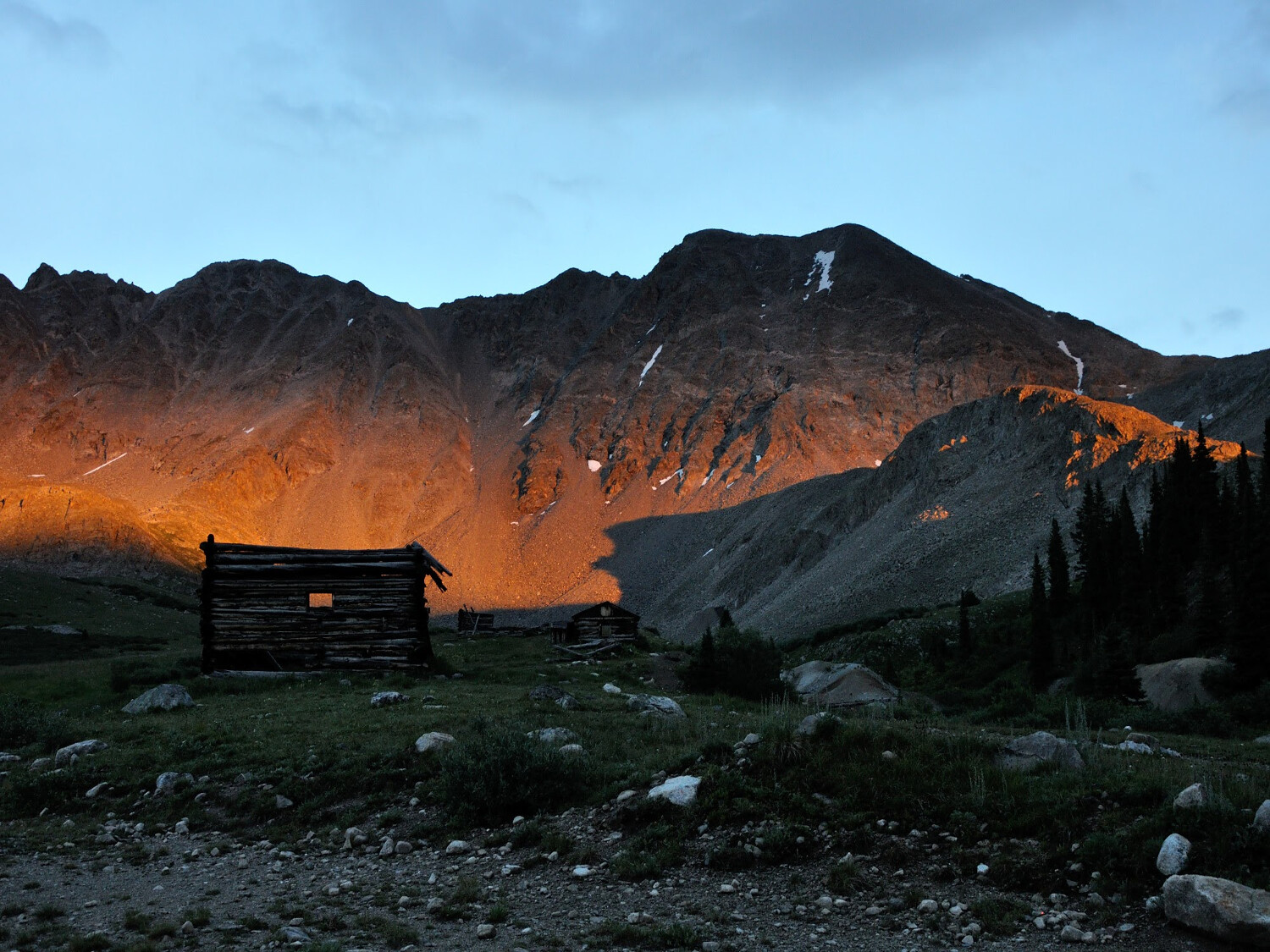 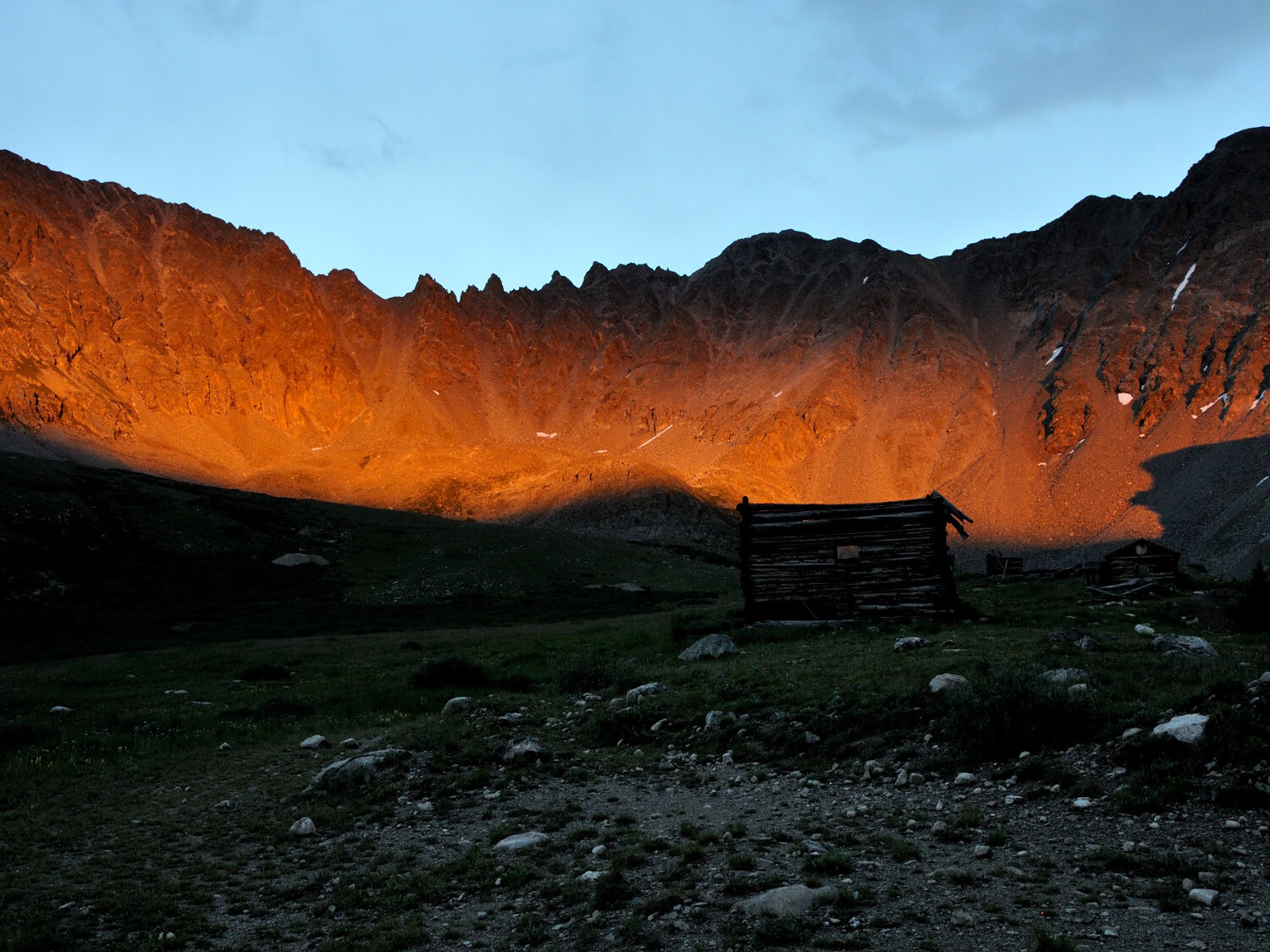 The next morning I hiked up to the old mine, explored around the ruins, and took some sunrise photos. That was fun, but after the show the universe put on the previous night, it was pretty anticlimactic. Still, not a bad morning. As soon as the sun hit my camp, I packed up my gear and hit the road down to Frisco. I stopped at the Log Cabin Cafe for a delicious breakfast and then jumped on I-70 for the quick 70-mile ride home. I got home around noon and marveled at the experience I was able to have in just 23 hours. Yet another reminder of why I love living in Colorado.